I sat at my desk, staring blankly at the small piece of paper lying in front of me, a small pencil beside it. The room was so quiet that the tick tock of the clock hanging above the chalkboard in front of the classroom was audible, as were the cars that whizzed by outside under the Summer heat.

I looked around the room, hopefully to get inspired but also out of boredom, and saw that my classmates all had their heads down, some scribbling random notes on their pieces of paper while others sat glassy-eyed in deep meditation and contemplation.

And then there were those who bored as hell and were probably waiting for the very last lunchtime bell that we would ever have to answer to as primary school students.

I turned my focus back on that piece of paper, still as blank as my mind was at that moment.

Come on, Kid! Just write something!

Even those glassy-eyed dreamers were now writing and then placing their pieces of paper into that damn jar.

You see, this was the last school day of 1997, the very day that my classmates and I were to graduate from sixth grade before heading off to high school once the Summer break was over. My teacher had provided us with a small piece of paper and asked us to write down our secret hope or wish or dream (whatever you want to call it) for the future before folding the papers up and placing them inside helium balloons that we would release into the sky at the conclusion of the graduation ceremony.

It sounds cheesy but that’s the way our teachers liked it.

And there I was, just a typical 12-year old kid aching to forget about all this and waste the rest of the day playing video games or watching TV.

After all, with high school looming I was anticipating a much heavier workload that would limit my free time so I wanted to get as much gaming time under my belt as possible.

As a kid I never really looked towards the future and thought about what career path I wanted. Hell, I didn’t know any kid that did, the only thing we looked forward to was hanging out and having fun without a care in the world outside of childhood fantasies of fame, fortune and becoming superheroes.

And then a lightbulb suddenly went off in my head. Finally!

I quickly reflected on the last few years of school, particularly about changes to my physical appearance during that time and the ripped physiques and supernatural feats of power, speed and strength that some of the characters from my favorite video games and cartoons displayed. I had started putting on some weight after I had turned 10 and continued to fill out in the next two years and so by the time I sat down to write about my dreams for the future I was a chubby and vertically-challenged kid with pretty crappy self-esteem. Every playful jab and man-boob joke that came my way, along with the desire to look like a ripped beast, collided head-on in my mind and quick as a flash, I grabbed my pencil and scribbled down my wish.

What did I write, you ask?

I wish I was muscle-bound.

Yes, you read that right. Feel free to laugh.

I wrote down those words, quickly folded up that piece of paper and then shook my head in disbelief. My classmates probably wrote something profound about wanting to be rich and famous or to contribute to world peace and there I was, wishing just to be better-looking.

Is that the depth of your ambitions!?

Yeah, it was an extremely shallow wish but it was better than nothing. I approached my teacher’s desk and dropped that folded piece of paper into the jar before strolling back to my desk, still chuckling to myself at what I had just written.

Following the final lunchtime of our primary school lives and a brief moment in our classrooms to pack our bags and have a final moment with our teachers, the entire school assembled to the school’s main grounds to kick off the graduation ceremony, with us sixth graders seated near the front of the main stage. It was a warm Summer afternoon, thank God that the grounds were sheltered from the sun’s rays.

For the next hour students listened pensively to speeches from the principal, teachers and student leaders while our parents sat or stood all around, some listening intently while taking pictures or recording the proceedings with their camcorders (it was still the late 90s) and others brushed away at teary eyes hidden behind sunglasses. It was an emotional moment for them and even some teachers were tearing up. You never really know how much they care until moments like these.

Many speeches and a few songs and prayers later, we were all handed a helium balloon each, each one containing those little wishes that we wrote earlier. It was hard to tell if the balloon we held in our hands contained our notes or someone else’s, but I guess someone else could be holding ours in their own balloons. In a last show of authority for their students our teachers told us to release our balloons into the air and soon, the sky was filled with multi-colored helium balloons that went up and up and up, although one was momentarily caught among trees before the wind gently guided it back skywards.

My classmates all hugged and high-fived one another and wished each other success – some with tears in their eyes that seemed to suggest that they would never see each other again. To be honest, it was an amusing sight for me. I mean, most of these kids were going to the same high school and were most likely going to hang out together during the holidays, so why the tears? They were probably going to see each other the very next day.

Looking back I guess they were just overcome by the magnitude of completing their primary school life.

The teachers also joined in, bidding their students farewell, passing on their best wishes and offering quick life advice. It was probably the only time that teachers and students showed true affection for one another, suddenly old wounds and grudges between them were forgotten.

As for me, I ran straight back towards my family who were waiting and we quietly slipped away, no fanfare and no good-byes. I know it sounds snobbish I just wanted to get the hell out of school and get the holidays started. I wanted no parts of that mushy shit.

As my father drove the family car home, I sat in the back next to my younger sister, both of us joyful at the end of another school year and an upcoming family trip that my parents and relatives had planned for us. We were on cloud nine, and the immediate future looked bright.

But many years later I suddenly remembered it. And you know what? After everything I had gone through between then and now, I think my teacher might have been onto something after all……..

I was never genetically gifted.

I was a chubby kid and was predisposed to being on the skinny side as I got older.

I am also considered vertically-challenged for a male.

I am not naturally athletic.

I was relentlessly bullied during my school years and was often reluctant to fight back.

I guess you could say I was a dweeb.

But I refused to stay that way.

During my mid-teens I set off on a journey to get myself into shape – despite the odds seemingly stacked against me.

All I had was a single old piece of exercise equipment that my father gave me and my imagination.

And over the years, I used what I had to transform my body.

It wasn’t a smooth road, there have been some embarrassing fails and minor injuries.

And self-doubt was never far away.

But I persevered and can proudly say that I have built my body mostly on my own.

Yes, I did consult various articles, magazines and videos and people I knew that worked out also provided valuable advice.

But I did not have to splurge money on gym memberships, personal training sessions and overly-fancy equipment to transform myself.

And I continued to eat like a ‘normal’ person would. No special diets required.

I guess you can say I’m just a regular guy with plenty of determination and guile and perhaps a hint of madness.

But you know what they say?

If you want it bad enough, you’ll stop at nothing to get it.

And to quote the late former heavyweight boxing champion of the world Ken Norton, “What the mind can conceive, the body can achieve.” 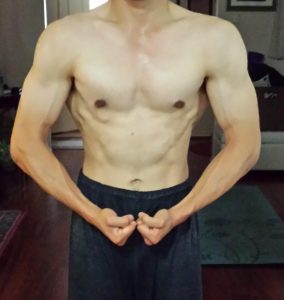