I guess it had to happen eventually. I undertook my university degree by correspondence and a part of that involved having to select my subjects at the start of every semester.

On one particular semester I chose a particular subject that got the better of me. Twice.

Now, when I was in elementary and high school, I had never had the misfortune of being on the wrong end of a failing grade, even on the odd occasion that I got a bad grade. But with this particular subject I finally got my ass kicked and it was not a good feeling.
Determined to get even, I selected the same subject again the next semester  and despite studying harder and receiving better marks, it was still not enough for me to pass the damn subject.
It was at that moment that I decided the concede defeat. I didn’t want to waste time wracking my brains on a subject that clearly was beyond me.

Despite that little speed bump, my studies – and life in general – were still going well. I eventually went back to my winning ways at uni and I was still doing great at work.
And of course, I was still on top of my fitness. I stuck to the same routine that I had started the previous year, so muay thai followed by strength training with my dumbbells and bodyweight. However, there was a newcomer to the mix. Sometime during the middle of the year, my mother had purchased a treadmill and every once in a while I would forgo the muay thai training and run on that thing for twenty to thirty minutes as my form of cardio.

I can still recall the first time I went all Forrest Gump on that treadmill. Having not ran in years I was extremely rusty and boy was I humbled! I may have been in fighting shape but running shape was a totally different story. I stepped off that treadmill with jelly legs, my lungs were on fire, the room was spinning and I saw spots. I came close to blacking out on a couple of occasions and wondered if I was dying!
But rather than run away (pun not intended) from that treadmill forever I incorporated it into my routine. Those treadmill sessions may have served to remind me just how much I disliked running and filled me with dread but I saw it as a personal challenge to tame that machine rather than allow it to beat me into submission.
I continued to alternate between muay thai, boxing and running for my cardio workouts – grunting, swearing and sweating hard in the case of the latter – to further challenge my body.

Sometime around May of this year, I contracted a virus of some sort that left me incapacitated for a few days. The falling temperatures no doubt had something to do with it but in addition to a runny nose and sore throat my head was pounding, I felt weak and listless and I had chills despite running a high fever. For the next three days I spent my days in bed, robbed of my strength and appetite and unable to spend more than a few minutes on my feet without feeling dizzy. Sure, I took one day off work (I was struck down on a Saturday and took Monday off) but that one day off wasn’t exactly sunshine and rainbows. I spent the whole day indoors with a sore throat and blocked nose, though the headache had mostly dissipated by then. Yeah, it wasn’t exactly a Ferris Bueller’s Day Off type of situation.
Thankfully I recovered quickly and was back to normal by the end of the week. Although I would be lying if I said that I wasn’t disappointed about missing a week’s worth of training and I also missed a week of studying. Yeah, I know what you must be thinking; ‘You still could have studied since you do your university course through correspondence!’ True, but studying was the last thing on my mind when I had a sore head and throat and blocked nose to deal with.

We didn’t take any overseas holidays this year but we did return to Tasmania during the summer holiday in December. We had such a great time last year that we decided to do it again – and it was still every bit as enjoyable as it was in 2008.
All told, 2009 was a great year. Sure, there were two major F’s but other than that, it was all good. 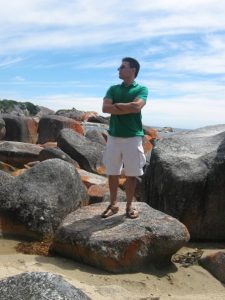 Finish off with 15 to 20 minute run on treadmill

Muay Thai or shadow boxing workout for 15 to 20 minutes