I’d be lying if I said that the months between the end of the HSC and my first job were an easy ride. There were days where I went to bed staring uncertainty in the face, wondering what to do with my life.
While I had finished high school and passed the HSC my score was not enough to get into my preferred university course and, with no back up plan in place, I felt as though I were in the middle of the woods, staring down different paths around me and wondering which road to take.
And on other days it felt as though there were no different paths in sight and that I’d hit a dead end.
I guess I was bearing the brunt of not having a Plan B, C, D and the lot. I was so lost.

Obviously, I needed to find work now that I had to start supporting myself but what kind of job? What the hell was I qualified for!? And I still wanted to earn a university degree but how was I going to get one of those now?
I was driving myself up the wall with these thoughts and getting nagged by my family certainly didn’t help. Day in and day out it was, ‘so have you found a job yet? Have you decided what you want to do with your life?’
I knew that they meant well but in my mental state their words were aggravating rather than helping.

I’m fresh out of high school and have zero work experience. You think I’ll find a fucking job THAT quickly!!!???

But despite all of that, I still kept on training. Just as it was during the tough times at high school, working out became my refuge from my problems. I woke up every morning looking forward to warming up and getting stronger and those thirty to sixty minutes proved to be the high point of my day where I felt strong, wild and free, sad as it sounds.
And then after I had cooled down and stretched, it was downhill again, back to reality, back to feeling lost and hopeless all over again.

I was so messed up.

Anyway, now that I was nineteen years of age and starting to see muscles popping out of my body I thought that perhaps it was time to put on some serious size and so I began to look into bodybuilding and the way that they ate and trained to see if I can incorporate some of their methods into my workouts. I guess you could say that the twelve-year old version of me had come out swinging now that school was over and I was old enough to train hard without worrying about damaging my joints and stunting my growth – not that I grew that tall anyway.
I continued to put my old school backpack to work, loading it up to zipper-bursting levels and slowing down the pace of my bicep curls, tricep kickbacks, push-ups and squats in order to place my muscles under strain, hopeful that it will spark some muscle growth.

Reaching deeper into my bag of tricks, I also began performing pull-ups using my wardrobe door! Thankfully, I am not that heavy so the door withstood my weight but nevertheless, I heard it groan and strain at times so I was still wary that it might snap off its hinges! Still, it was a good workout for my back and for the latissimus dorsi muscles (shortened to ‘lats’) that I had been trying to grow lately.
Inspired by the Rocky series that I still watched regularly, I also tried my hands at single-arm push-ups the way Sylvester Stallone performed them in the films. Having just mastered performing more than fifteen normal push ups without fatigue a couple of years prior my early attempts were, as expected, a huge fail. Just the mere act of setting my body up for the exercise was a challenge and I lacked the coordination and strength to do more than three on each hand without collapsing – probably closer to two and a half than three. Not one of my finest moments and I ended up hurting my lower back due to my terrible set-up, but I was still proud of myself for giving it a try.

I vowed on that day that I would one day perform single-arm push ups like a real pro.

Now, you would think that, at nineteen years of age I would have finally outgrown my body image insecurities. Well, for the most part I did, there was no more obsessing about my height and feeling bummed about man-boobs. But there was still one minor source of frustration. As fit and strong as my body was becoming, I just could not uncover that coveted ‘six pack.’ Don’t get me wrong, I was pleased with the biceps, triceps, traps, pecs, calves etc that were starting to develop but those damn abs refused to come out and play.
Let’s just say that I had become so desperate that I even brought the bullworker back into my workouts. The manual did include exercises for the abs and so I zealously incorporated them once more into my routine.
While those elusive abdominals still wouldn’t reveal themselves, I was impressed with what I had achieved so far. Muscles aside, I felt fitter, stronger and livelier everyday and well, I thought I looked pretty good. And the best part is that I had done the hard work mostly ON MY OWN without a gym full of fancy equipment at my disposal.

Screw the gym. An old bullworker, my school backpack and a door, of all things, for the win, baby!!!

As for my diet, having immediately got caught up in the old bro science advice of “protein builds muscles, bro” I went hard with my protein consumption. I would pile on as much meat as I could manage onto all my meal plates, ate at least two boiled eggs every breakfast and chowed down on nuts in between meals.
To be honest the only thing that did for me was make me gassy and full after most meals. But it was still worth a shot, right?

No, the reason why I wasn’t quite making the progress that I wanted was that I wasn’t training and eating as smart as I should have been. I mean, I was lifting heavy things every session and putting my muscles to work and feeling good everyday but outside of training sessions I wasn’t moving much, still mostly sitting on my butt watching tv or reading a book. It didn’t help that when I finally got a job it mainly involved sitting behind the desk and I complied wholeheartedly. The only times I would stand would be to walk to my locker to grab something from my bag or to go to the bathroom.
I guess you can say that while I considered myself ‘active’ due to my working out, I was technically still inactive since I would only move when required. Movement and mobility still didn’t dominate my day to day life the way it’s supposed to.

And while my diet was healthy for the most part, I still ate like a typical teenage boy most of the time. That meant eating what I wanted whenever I wanted without cutting back on some of the ‘guilty pleasures.’ Perhaps I had become quite cocky since I believed that I could get away with eating anything I wanted and that my workouts, all thirty to forty minutes of them, would burn everything off in addition to the house chores I still did every weekend. While it was true that my body burned off most of what I ate, I still could not achieve that athletic ‘ripped’ look that, deep down, I really wanted.

I was still very much a work in progress. There was still much to learn.

But there was one major change to my lifestyle. One that had been a long time coming. One morning, following a forty minute gaming session, I packed my beloved video game consoles and cartridges back into their boxes and stored them in my wardrobe, effectively ending my gaming days. Why did I do it? Well, it was primarily because the DVD collection was growing and we needed the extra space near the TV, but it was also because I had decided that it was time to move on. I was spending more time working out rather than playing games so it was better to pack them up instead of leaving them there, collecting dust like some unwanted old relics. They deserved better than that, having kept me entertained during my childhood.

Things also began looking up in the work and study front from the middle of the year onwards. I finally landed my first job in late June and also began studying a small business management course at TAFE, not quite university but at least I’d be qualified to do something at the end of it.
I worked as a government employee from Monday to Friday and it didn’t take up too much of my time, only four to five hours per day depending on the workload and it paid me a decent amount of money and I only had to attend class for two evenings a week with the TAFE course.
In other words, I still had plenty of free time on my hands and I mainly used them to train and unwind. The stress and anxiety from the past few months had finally been exorcised and life was good again.

And so for five days a week I woke up, dressed my best and went to work before training in the afternoon, but for two days a week (every Tuesday and Thursday, if I remember correctly) those afternoon training sessions would be cut in half since I had to head out again for TAFE.

All in all, a pretty decent schedule that balanced work and health.

1. Firstly, make sure that the door is sturdy enough to bear your weight

2. Cushion the bottom of the door with a towel / folded up shirt or anything of the sort to reduce pressure from above: 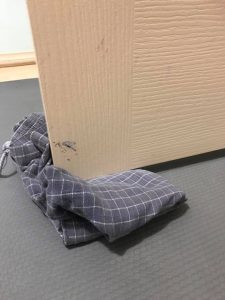 3. Spread out another towel / shirt or anything similar along the top of the door to reduce soreness to your hands 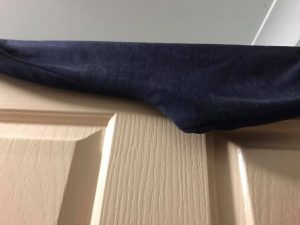 4. Grasp the top of the door with both hands, spread about shoulder width apart. You can go slightly outside of shoulder-width to really work those lats. Ensure that your chest and abdomen are pressed against the door. 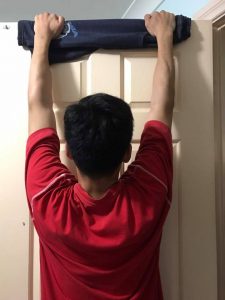 5. Inhale before pulling yourself up as you exhale, squeezing those shoulder blades and using those lats. Your chest and abdomen should remain pressed onto the door all the way. 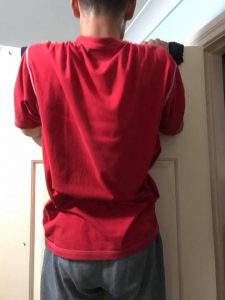 6. Slowly lower yourself back to starting position as you inhale and repeat for as many reps as needed.